US Department Of Commerce hosts meeting between Iraq and PowerPlus DCU 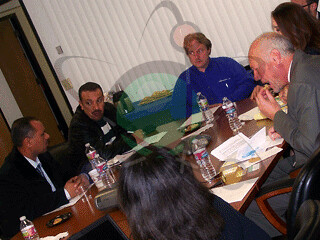 There are many oil spills that happen almost every day. Sadly, some of the major ones go ignored for years with consequences that can be staggering. Iraq is now facing an environmental catastrophe. Saddam Hussein, dumped crude oil into the ocean in hopes of sinking U.S. Naval vessels. It was a failed attempt to keep the US from entering Iraqi harbors, but instead created an oil slick several inches deep which now crosses over 750 miles of Saudi Arabia’s sandy beaches and marshes. This has created an environmental nightmare for the ecology and eventually the fish trade of Iraq.

The fishing industry, which the Saudi people rely on for food and trade, has been greatly impacted by the oil contamination. The local fish which would normally spawn in those areas ,now covered in oil, are either dead or moved away from these areas. The result in lack of food and trade has caused an outcry for the oil spill to finally be dealt with.

In an initial move, the Iraqi government reached out to PowerPlus Cleaning Solutions under the guidance of the US Government. PowerPlus met with the representatives and scientists in order to begin talks and get this project underway. The talks included much of the unique technology that PowerPlus provides and how it could be used to treat their disaster in a timely and cost effective approach.

The Iraq representatives left much enthusiasm and are expected to have more talks and negotiations to start again very soon. This is a tribute to the unique solutions that PowerPlus Cleaning Solutions has to offer the world with decontamination and reclamation opportunities.

For a PDF version of this article, click here